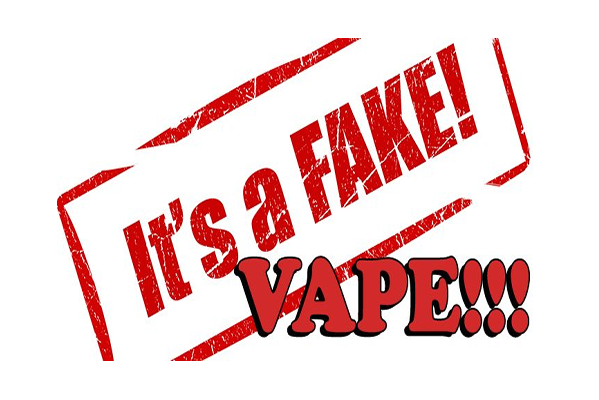 In September of 2019, dozens of people in the Midwest and California got sick from vaping e-cigs or cannabis products; this goes to highlight the caution that consumers, vape makers, and retailers must now have when considering where and how their vaping products are made.

In the vape and marijuana industries, vape technology has long posed serious health and safety concerns. The Associated Press reported on September 13, 2019, that about 380 confirmed and probable cases of severe respiratory disease had been reported in 36 states after patients smoked nicotine or marijuana oil vapes. Six of the patients died.

Because vape technology is so new, the long-term health effects are unclear. Disposable cartridges are the fastest growing methods to consume CBD oils and e-liquids.

This recent emergence, similar to the rise of vaping itself, has researchers scrambling to figure out the long-term health effects of vaping with them.

Many states that have legalized marijuana are still defining their testing requirements. Lack of knowledge about vapes has led many marijuana consumers to question the safety of their vape cartridges and the industry has to take steps to reassure them if they want continued adoption of this trend. 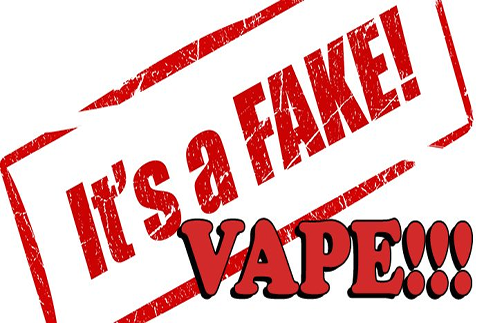 What's in a vape liquid cartridge?

While there are many vaporizers that can be used to consume dry herb and wax concentrate, the most popular style device appearing in electronic vaporizers is the portable pen design. Vape pens are used to vaporize e-liquids, hemp oil, and distillates.

The vape pen consists of two main components: a battery and a vape cartridge. The battery makes up the bottom of the vape pen and powers the heating element, which turns the e-juice or oil from the vape pen cartridge into vapor.

Most vape oil producers tell you the voltage that is compatible with the selected cartridge. These devices come in many different shapes, styles, and sizes.

Some vape pens have buttons to activate the vape cartridge, while others have no buttons and are only activated once the user inhales on them.

The cartridge includes a mouthpiece, a combustion chamber, and a heating element called an atomizer. The chamber is filled with an e-juice or a cannabinoid and terpene rich CBD oils, which are either CBD or THC dominant and have terpenes added.

When in contact with the battery, the atomizer is activated, heating the chamber and vaporizing the oil.

The cannabis oil that fills the vape cartridges is usually produced by a process called distillation, which strips the marijuana molecules to just cannabinoids.

So what about the distinctive flavors defined by the terpene signature found in the aroma of fresh marijuana flowers? All these are removed during distillation. Some hemp oil producers collect terpenes from marijuana in the process and later reintroduce them into the oil, giving the distillate filled cartage it’s flavor. More often terpenes used in flavoring distillates are derived from other natural plants. 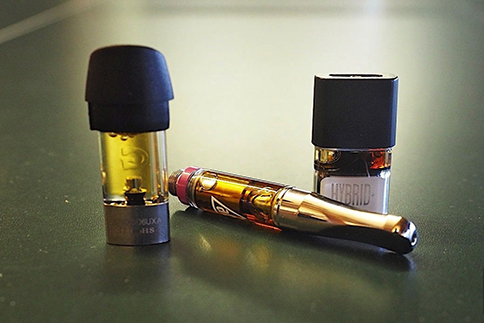 Are there contaminants in vape oil cartridges and pens?

The most common problem in the illegal vape market is concentrate on containing high levels of pesticides. When consumed at concentrated levels, inhaled pesticides can cause health problems. To ensure that vape cartridges do not contain harmful pesticides, it is essential you buy from established brands that disclose third-party test results and include pesticide screening.

Cutting agents can be added to enhance the strength and overall taste of the vapor. These are the common cutting agents sometimes infused with hemp oil and e-cigarette vape juice include:

2.Propanediol (PG): A binder added to cannabis vape cartridges because it facilitates an even vape draw.

3.Vegetable glycerin (VG): Has been added to the vape liquid to help generate larger clouds for the user.

4.Vitamin E acetate: Commonly used as a safety additive in food, but in some reported diseases, it has been found in thickeners in illegal THC cartridges. Vitamin E acetate is a different chemical from vitamin E, which occurs naturally in foods and supplements. Vitamin E can be safely consumed as food or as much as 1000 mg daily.

Although the Food and Drug Administration (FDA), has labeled the cutting agents safe for human consumption, there are questions about what happens when the compounds are inhaled. A 2010 study, published in the International Journal of Environmental Research and Public Health, found that inhaling PG may potentially worsen asthma and allergies. Other studies have shown that PEG and PG break down into the carcinogens formaldehyde and acetaldehyde when evaporated at high temperatures.

A growing number of hemp oil producers insist that they do not add any cutting agents to their products.

If you are concerned about the potential hazards of these cutting agents, look for raw products that contain only marijuana distillates and marijuana -derived terpenes.

It is not just marijuana oil that is contaminated. In the 2018 study, conducted by scientists at Johns Hopkins Bloomberg School of Public Health in Baltimore, researchers found that lead levels of toxic metals, including lead, leaked from the heating coils of some ecigs and seeping into the vapor which were inhaled. As the FDA continues to work out how to properly manage e-cigarettes and vape pens, it is up to vape cartridge manufacturers and test labs to catch potentially dangerous products.

Many vape cartridges are made in metal founders in China, many of which add small amounts of lead to brass and copper materials to increase the ductility of the metal. These include heating coils that heat up hemp oil, potentially transferring toxic metals into consumers' vapors.

How did counterfeit vape come to the market?

Counterfeit vapes are widely represented in the market for a number of reasons. Money is the main reason and the most obvious one. Some dealers like the fact that they can buy fake products at low prices. Therefore, they can sell fake brand products at low prices. In this way, they may weaken the market. Counterfeiters sell their junk in every possible way, so some dealers do not even know they are selling fake products and can easily be tricked into buying fakes if they are only concerned about the price when finding suppliers.

A large number of products on the market so it's easy to pass off a fake as a real as new products are introduced almost daily allowing fraudsters to replicate them before consumers are able to learn to spot the difference. Without lab testing the content of a vape cartridge, it's very hard to tell if the oil is fake, as many Many cannabis oil and e-liquid manufactures have been proactively trying to help consumers identify if the cartridges they have bought are real or fake.

How to tell if a vape cartridge is legal or fake

With the popularity of vape pens, the number of fake CBD and THC refills made has increased. Several well-known brands have been battling against counterfeit cartridges. Some customers can easily confuse the real cartridges with the fake ones because the logo, brand, and packaging used by these fake cartridges are almost identical to the logos, brands, and packaging produced by these leading brands.

Some retailers hold valid licenses. But other stores may sell products within the limits of existing regulations.

Although a regulated market for cannabis oils increases prices, it is far safer. That's why it's important to check that your retailer has the right license to sell your product.

If you don't see the license number, the store could be selling fakes from the black market. Maybe the shop is not following the current rules. In any case, it's not worth the risk of trusting this source. You can check the store's license for yourself. However, it is equally important to check the product you are buying. If something goes wrong, it could be a fake vape oil cartridge.

Check the unique branding of the product. Some may also include QR codes that you can check.

Even if you shop in a regulated market, you may end up with a fake cartridge. This is why you should check the product packaging to make sure it is legal.

If you are buying from a regulated market in California, you should see the label:

Labeling requirements vary from state to state. However, there should be some sort of regulation on the labels of cannabis products. Don’t buy any cartridges that do come with packaging, If you suspect a cartridge you have bought is fake go to the manufacturer's website and see if they have a QR code or serial number authenticated system.  If not a quick internet search on a specific brand could help you see if the brand has an established reputation for producing quality products.