0 
Cart
View cart
Checkout

Sign in Register
or
Home/Blog/Top 10 Cannabinoids and what their effects are on the body.

Top 10 Cannabinoids and what their effects are on the body. 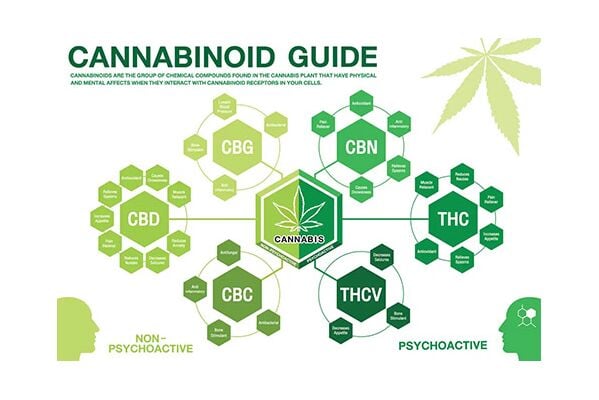 Top 10 Cannabinoids and what their effects are on the body.

Consuming marijuana has been proven to have wide-ranging effects.

These depend a lot on the strain of cannabis, the potency, how the cannabis is taken, and several other factors.

Some cannabis strains may make you feel relaxed and lethargic, while other cannabis can fill you full of energy and get you inspired with a creative rush.

Cannabis is used to treat a whole host of medical effects, both physical and neurological.

These effects are dependant on the cannabinoids and compounds contained in the plant. Not all cannabis is created equal, and its makeup will determine its effects when interacting with the human body. 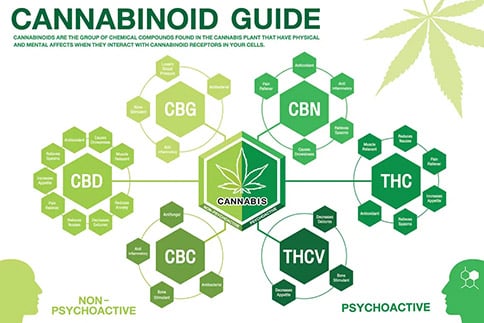 Cannabinoids naturally occur in cannabis and are similar to the endogenous cannabinoids created in the endocannabinoid system (ECS) of our bodies. 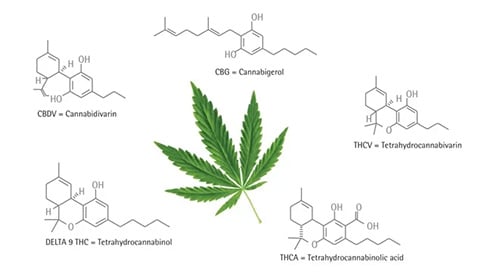 How do Cannabinoids Work?

Despite millennia of use, it wasn't until fairly recently that we discovered the source for the effects of cannabis on the body.

In the 1960s and 70s, research into cannabis led to the discovery of the endocannabinoid system (ECS). As research continued, it was discovered that cannabinoids bind to receptors throughout the brain and body. These receptors came in two different classes. CB-1 and CB-2.

CB-1, are the most common receptors found in the central nervous system.

CB-2, are the most common receptors in the body's peripheral nervous system.

Cannabinoids interact with receptors in a similar way to other chemical compounds in the body. They act as a key would in a lock. They bind t the receptors, which contain enzymes that allow the cannabinoids to be broken down and unlocking the effects.

A number of cannabinoids have been identified, and some of them have very different effects which match with the type and location of the receptors they interact with.

Let now take a look at the ten most common types of cannabinoids and acids, as well as their effects and benefits for your health:

THC is best known as the cannabinoid, which contains the psychoactive compound in cannabis. It has also been proven to be neuroprotective and has analgesic effects. 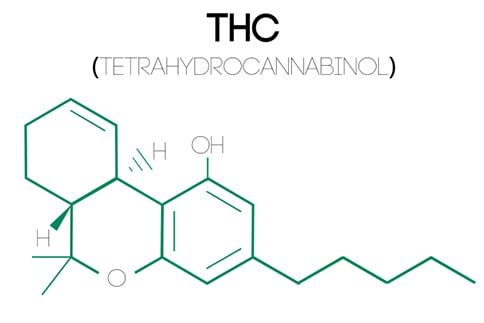 THCV is a psycohactive and an appetite suppressant. Research indicates that this compound could be helpful in treating metabolic disorders. 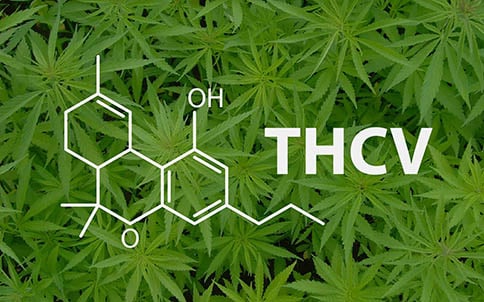 CBN is mild to nonpsychoactive and is generally regarded to have a sedative effect. The typical amount of CBN found in most cannabis samples is less than 1%. It is found mostly in aged cannabis. 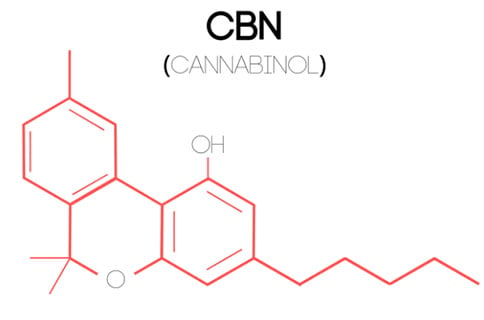 THCA is the most prominent compound in fresh undried cannabis. It is a precursor of tetrahydrocannabinol. While THCA is not psychoactive in its own right, it does have anti-inflammatory and neuroprotective effects. 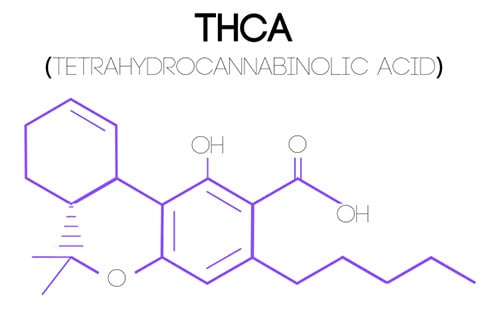 CBD is one of the most commonly known compounds in cannabis and is nonpsychoactive. It is attributed to many health benefits and has resulted in many strains being enriched to achieve higher CBD content. CBD extracted is consumed to treat many ailments. 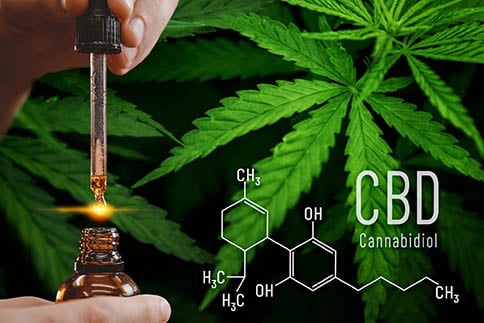 CBG is the decarboxylated form of cannabigerol acid. It is nonpsychoactive, and early studies have indicated it plays an important role in fighting glaucoma symptoms, inflamed bowels, and as a treatment for bacterial infections like MRSA. 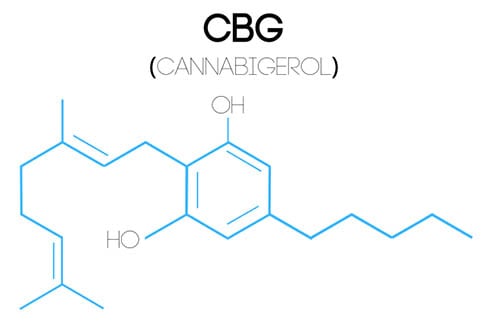 CBGA works as a building block for other cannabinoids.

Properties
It has potential as an anti-proliferative cancer treatment but needs further study.

CBC is one of the least understood cannabinoids. Research shows it could be among the most important. It is thought to stimulate bone growth and inhibit inflammation. Its also been shown to have analgesic properties and potentiated the analgesic effects of THC. 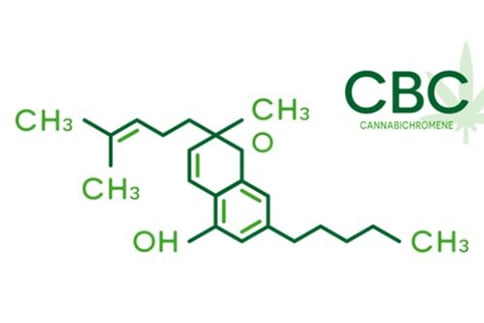 CBDA like THCA is one of the main cannabinoids in fresh hemp.

It is the chemical precursor to cannabidiol. Decarboxylated, it produces CBD. CBDA is nonpsychoactive and has anti-inflammatory properties. It is believed to offer relief from nausea and vomiting. 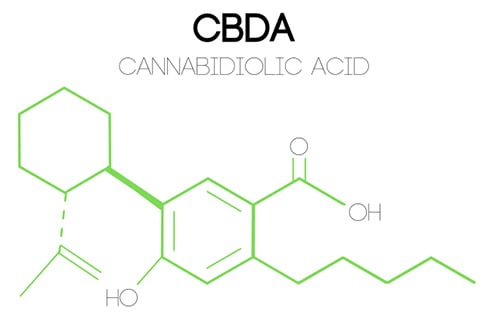 CBDV has been somewhat overlooked until recently. CBDV is structurally similar to CBD (cannabidiol), and it is nonpsychoactive. Much of the research on CBDV has been to do with how it affects the neurochemical pathway of the capsaicin receptors, making it useful as an anti-epileptic. 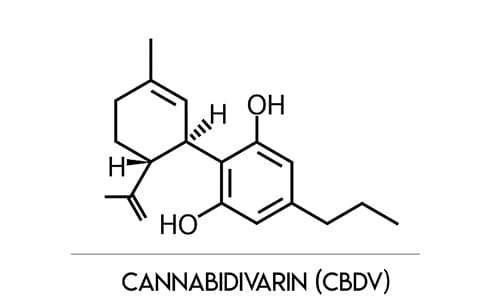