History of the bong 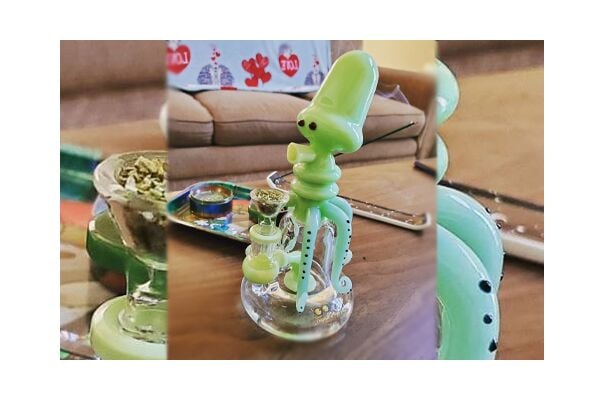 History Of The Bong

The bong is undoubtedly the most popular and loved smoking device in our history of cannabis use.

Bongs in Central Asia and The Silk Road.

The Thai word "baung" is where we get the word "bong" today. This type of bong is specifically referred to as the bamboo bongs. These water pipes were ubiquitous throughout Central Asia.

The theory goes that the use of water in bongs was introduced during the Ming Dynasty in China. The practice was spread via the Silk Road trade network along with tobacco.

One Chinese regent, Empress Dowager Cixi from the Qing Dynasty, the last impreial dynasty of China, was even found buried with her three prized bongs. Some of her collections  may be seen to this day in the Palace Museum. However bongs go back far beyond this.

The Bong was Invented in Africa.

J.C. Dombrowski is credited with the discovery of the oldest bong-like invention containing cannabis residue, which was found in Africa.

The first bongs, these crude smoking devices were made using lit coals placed in a bottle that was buried in the ground, and the cannabis was placed on top of the hot coals.

An underground duct that was a considerable distance away from where the pipe lay below the ground lead to a mouth tube through which hearb was smoked.

However, if we are looking for the first hand held bonngs like we know today then it is to Ethiopia we must go, it was here in a cave where the earliest known hand-held bongs were discovered dating from between 1100 and 1400 CE.

Many of the 11 bongs found in the cave were created using repurposed pottery and animal horns.

In 2015 construction workers, clearing land for a power line, unearthed a Kurgan.

The word Krugan, курга́н in Russian and the Ukrainian language appears to have been taken from the Polovtsian language and means: something akin to a fortress, embankment, or high grave. These burial mounds have been found from the Black Sea and Caspian steppe through Central Asia to Mongolia.

Experts excavating this Russian kurgan found a pair of gold bongs dating back some 2400 years.
These items were credited to the Scythians, a fierce nomadic group that ruled over the vast grasslands of Eurasia. The Scythians didn't build big cities or grand settlements, but they did leave behind these grave mounds.
These bongs were part of a hoard of 7lb of gold and thought to be part of some tribal chiefs burial mound, the residue of cannabis and opium found in them confirms written accounts from the ancient Greek historian Herodotus that the Scythians used these drugs, possibly in a ritual to embolden them before heading out to battle.

In 1945, archaeologist Mary Leakey found a water pipe in Tanzania.

A tube connected the bowl on top to a lower water chamber at the bottom. The mouthpiece is placed on the curved neck of the gourd.

When she was discovered, experts took it for granted that Arab navigators brought marijuana and marijuana pipes to Africa in the mid-13th century. They concluded that these marijuana pipes must have evolved from Asian pipes. But the history of this version has never been meaningful.

The theory, however, ignores the fact that in Asian Islamic societies, cannabis was eaten rather than smoked, and the introduction of the water pipe wasn't until the early years of the seventeenth century.

Also, all archaeological evidence shows that Africans mainly chew and smell tobacco while mainly smoking marijuana. Another theory holds that marijuana can be adapted by straightening pipe and filtering it in water. This theory is also wrong because marijuana appeared earlier than tobacco in Africa.

As for its name, we are told it comes from the Thai word bong. But did Thais get this word from Africa or did it develop there independently?