All You Need To Know About Cannabis Concentrates. 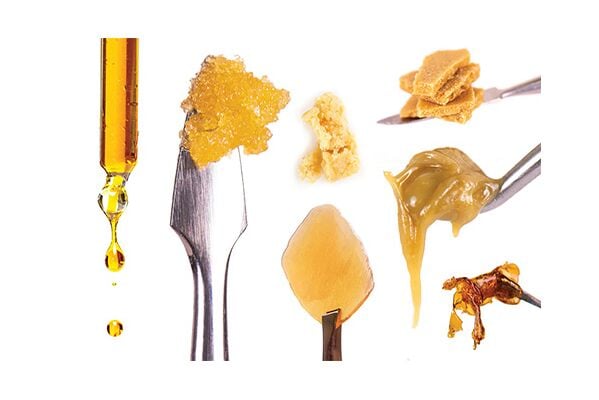 Cannabis Concentrates - All You Need To Know

If you're not in the know, dabbing is inhaling the vapor from cannabis concentrates. Two common ways to do this is with a vape pen or a wax rig. There are many different concentrates out there which we will cover later in this article.

You have probably guessed from the name "concentrates" that these products are a concentrated form of the marijuana plant. 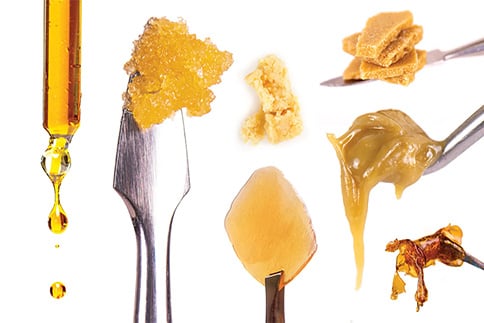 How are Concentrates Made?

Making cannabis concentrates involves separating and concentrating trichomes, the cannabinoids, and the terpenes from the marijuana plant.

Scientists have identified a 110 different cannabinoids and over 120 terpenes in cannabis plants. These are produced in a part of the plant called the trichome. That is the name of those tiny white crystalline bits that resemble little mushrooms and are found on the plant's buds and leaves' surface.

Not only do the terpenes give different strains of marijuana their unique flavors, but they can also enhance or modify the psychoactive and medicinal effects.

Additionally, this part of the plant is what makes it sticky. It most likely plays an essential role in protecting the plant from insects and the elements.

Cannabinoids are those chemical compounds that act on the endocannabinoid system of the human body and brain. THC and CBD are perhaps the best-known cannabinoids.

THC is the one containing psychoactive properties，so its largely responsible for that euphoric feeling. CBD, on the other hand, contains the healing and pain relief properties.

Concentrates can be split into two groups, solvent-based concentrates, and non-solvent /solventless concentrates.

Solventless concentrates are made using pressure, filtration, and heat to remove the cannabinoids and terpenes from the plant material. It requires more time than solvent-based extraction. However, it is regarded as a more natural method of making concentrates. Indeed many of these non-solvent concentrates can be traced back to ancient India or China.

These are extracted from cannabis using a solvent such as propane, butane, or carbon dioxide.

The names for many of these cannabis concentrates are derived from their appearance and physical properties.

More commonly known as kief, sift is a straightforward form of cannabis concentrate with intense results.

It's made by sifting the dried flower over mesh screens and collecting the trichomes at the bottom. This resulting fine powder can easily be used in a vaporizer, added into joints, or sprinkled over bowls.

Some smoke shops will make "live sift," this is sift made from the same frozen plant matter as would be used with live resin. This gives it a tastier, smoother hit than traditional kief.

Kief/sift is harder to come across these days as it has lower profit margins and potency than solvent extracts. It's easy to collect your own at home by using a filtered weed grinder to collect and store your ground herb's kief. 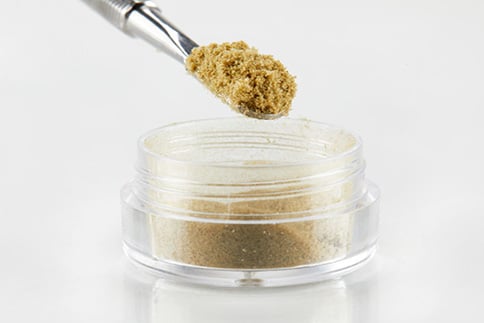 Hash has been around for millennia and can be made in several ways. Perhaps the easiest is to compress kief into a small bar. Another way is with ice water and to pass the extract through the screen to collect the concentrate. Hash is often smoked by itself or mixed with the dry cannabis flower. 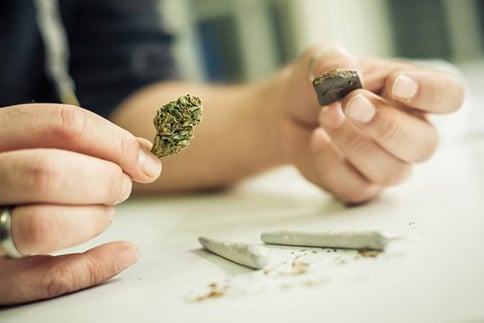 Charas is a form of hashish made slowly from hand rolling the flower and part of the cannabis plant's stems. This releases a black tar-like substance that is worked into a ball. It plays a crucial role in the Hindu religion of India. The God Shiva is renowned for his love of cannabis, and those devoted to his worship smoke charas as part of their religious practice. 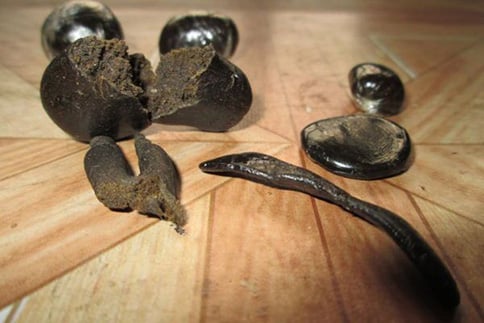 Sadly, bubble hash has begun to drop in popularity as stronger concentration take over dispensary shelves. While this is listed as a solvent-less concentrate, it is generated using water as a solvent. However, water isn't considered a solvent, which can make its categorization a little confusing.

The easiest and hence most common way to make bubble hash is to put the marijuana in mesh bags. A mixture of plant matter, water, and ice are filtered through them until a thick substance containing the resin is concentrated at the bottom. This is then dried out, and the resulting product is bubble hash. It can be smoked like other hash, in a pipe, crumbled over a bowl, or mixed into joints. 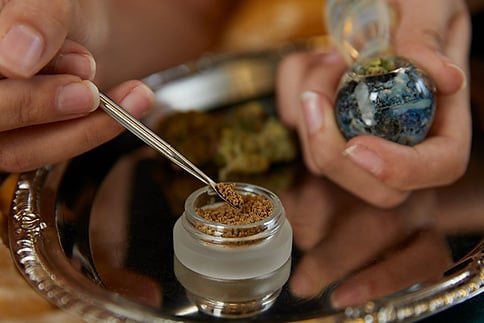 It's also popular in weed stores, and the commercial makers use industrial heat presses to make it. Its usually sticky and brittle a little like shatter. 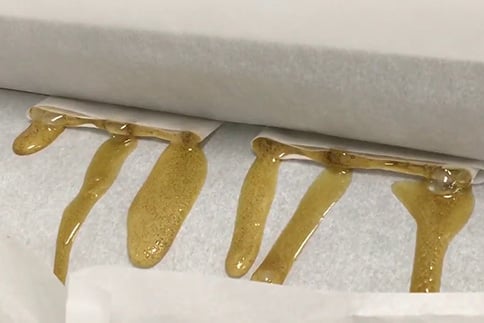 As its name suggests, this concentrate is waxy in nature. It can be very sticky and is often a creamy yellowish color. It can be used in a vaporizer or a dab rig and varies in consistency from thick treacle to a more crumbly wax. This consistency variation is due to the moisture and heat levels in the extraction process. 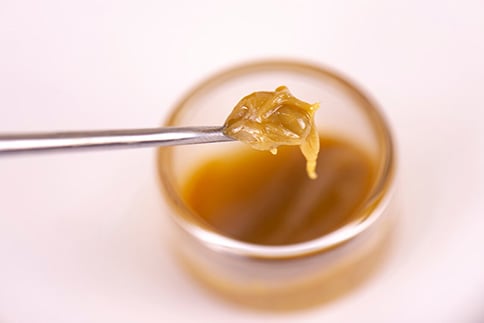 Shatter is a common form of concentrate found in nearly all dispensaries.

It is sometimes sculpted into cool shapes and has a translucent glass-like consistency from which it derives its name. It's one of the purest forms of marijuana concentrate and clear or amber in color. Its often made using butane as the extraction solvent. It can give a hard-hitting high, and its composition makes it ideal for dabbing with rigs or using in vaporizers. 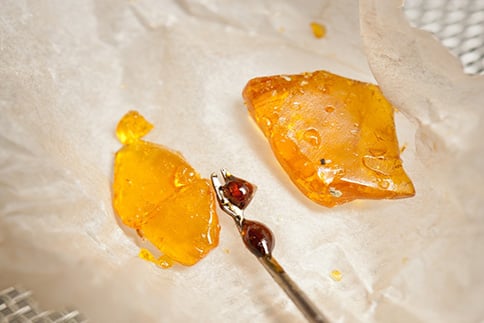 Pull and snap is very similar to shatter but it has a taffy-like consistency. As its name suggests it is malleable and can be stretched, however will snap when a fast motion is used upon it.

Budder is a variety of wax-concentrate that's become relatively popular. It is typically extracted with CO2 or butane, so certainly not something you'd want to make at home. Budder is made by blasting the solvent through marijuana, which extracts the THC. This is then "purged" with heat and air pressure to remove the solvent. It is a similar process used to create crumble wax and shatter。

A waxy paste substance can be created by agitating and whipping the extracted cannabinoids as they begin to crystallize. 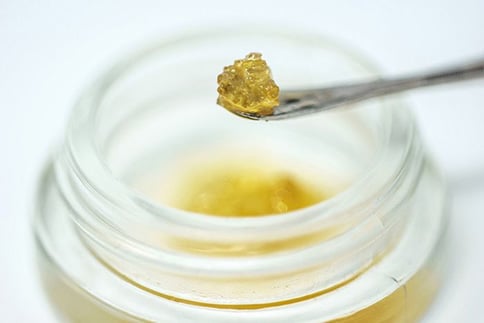 Crumble wax is made in a similar way to shatter and budder. A common way to make wax into crumble is by purging for a longer time at a lower temperature. This preserves more terpenes and also makes for a better-tasting concentrate.

Its crumbly form makes it a little harder to handle, although you can shave granules off and use them in vaporizers. 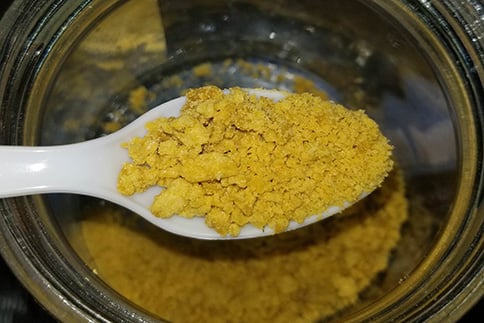 Live resin concentrates are made by flash freezing the fresh plant. This skips the drying and curing phase, which results in a richer flavor as it preserves the terpenes.

Although you can make live resin with CO2 extraction, nearly all varieties that you'll find in dispensaries are made with butane extraction.

It's becoming ever more popular due to its strong flavor, which also attracts a higher price tag. 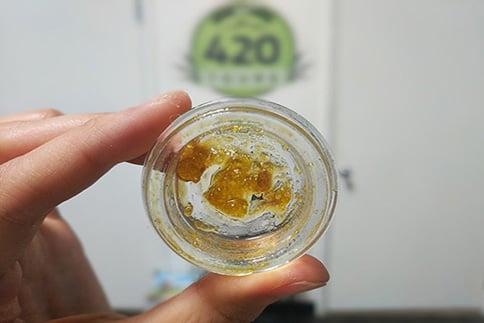 Distillates are made through a process called molecular distillation. Distilling hash requires taking winterized concentrates — butane or CO2 hash oil refined with alcohol or ethanol and then chilled at extreme temperatures — and then distilling them to concentrate the THC further.

The process is repeated to remove any impurities, such as leftover solvents or lipids, in the concentrate. The result: a clear, odorless concentrate virtually free of solvents. Distillation can take BHO or CO2 oil with a 70 to 85 percent THC potency and refine it to upwards of 95 percent. 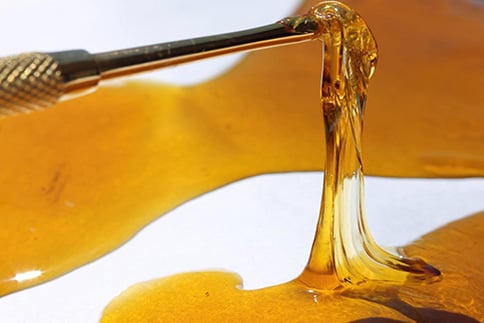 Terpenes are lost during the THC distillation process because the THC is separated from virtually every other compound, leaving an odorless, tasteless concentrate. However, terpenes can be extracted from flower and hash, too, and that's where terp sauce comes in. 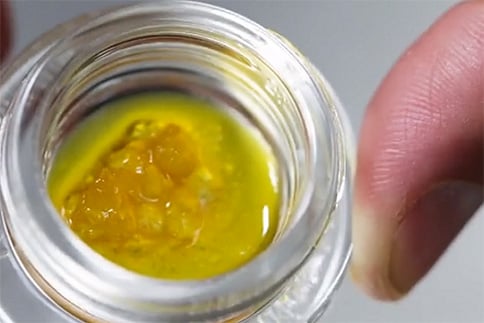